For years the question of Bert and Ernie living together making them queer or straight has raised it’s head once again. This time when one of the writers of Sesame Street answered the age old question by saying that they are gay. However, the creator the character Bert, Frank Oz, challenged this by saying that they are not. He stated that he knows for he created the character and he would know, whether it was the case or not. He also made a statement by saying, “It seems Mr. Mark Saltzman [former writer] was asked if Bert & Ernie are gay. It’s fine that he feels they are. They’re not, of course. But why that question? Does it really matter? Why the need to define people as only gay? There’s much more to a human being than just straightness or gayness.” By answering the question in this way he was challenged for it and ridiculed for his answer extensively on Twitter.

Why should we as writers, pay attention to this issue? The answer is simple in that we create characters every day and granted readers can make their own conclusions about them. But we should not be attacked for disagreeing with the conclusion that was made about a character. Right?

I know that we live in a world, where we must be careful about what we say and write, but as creators we should not have to take the stand that are characters are what the readers want them to be. Back in the ’90’s we had a slew of television shows where male characters were roommates and there was never the question if they were “together” or not. Let’s look at Full House, granted we know that the male leads were all heterosexual but if someone said that they were homosexuals living in the closet it would have been a scandal. The same could be said for the show Friends if it was also the case.

I’m not going against the LGBQ community but what I’m saying is that viewers and readers need to also take a chance when listening to the creator’s words about how their characters were created. But to be attacked for not going along with the idea that others are trying to put on characters is just wrong. But let’s say that this is not about Bert and Ernie but rather other beloved characters such as the smurfs. Granted, the smurfs for the most part are a male society and there is only one female.

No one has claimed that she is being abused by the male smurfs. But if we were to go down that path when talking about the smurfs, there is no putting the genie back in the magic lamp. Now the vision that we have the smurfs has changed. Why would it change? Look at the #metoo movement. That has changed our world to the point that in someways it is being compared to the Salem Witch Trials. The world has changed for the work place and all things that we as writers much take into account. Now it has changed for Bert and Ernie as well and some other childhood characters, along with their creators.

When Bert and Ernie was created and living in that apartment they were just roommates much like the Odd Couple. Ernie was the crazy one and Bert was the strict one. They were the childhood versions of the Odd Couple. Granted, Ernie doesn’t smoke cigars like Oscar, and Bert doesn’t dress in a suite and tie all the time like Felix. But they were created for the intentions of teaching children that people can live together and be friends despite their differences. They were not homosexual at that time, but granted the world has changed, and people’s views of have changed with the time.

However, to take down a creator for defending their views on the character(s) that they created there is a line that has been crossed. It’s not like he did a J.K. Rowling, who has later come out and said that this character should have died or this character is actually a homosexual after I said that he was a heterosexual. Frank Oz has always stayed by his stance that his characters where not and are not gay. But he is right there is more to a person than if they are gay or not. That is what we do as writers, yes, we must take sexuality into consideration when creating characters, but it should not be the defining line about whether the character lives or dies in the book.

We are told that characters are usually defined as they want something and they need something. Granted, if sexuality is coming into the want and need that is fine. But to make complex characters we need to go beyond just the sexuality.

I know that I will get some consideration and criticism for the argument that I’m trying to make, but we as creators should not be boiled over the hot coals for not agreeing with our readers on how the characters should be that we created. We as writers have an image of them and that is how it should be, and our readers can have their own image of them and that is fine too. 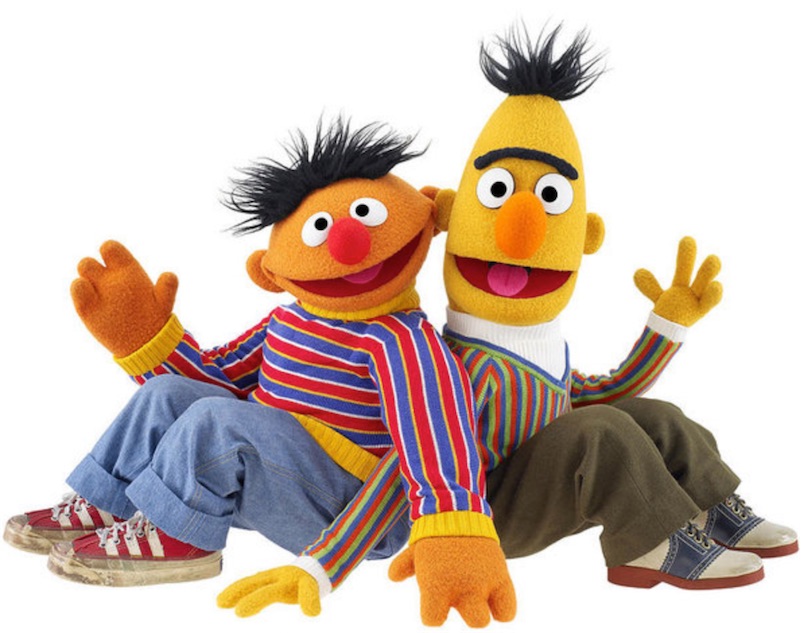 Furthermore, it should be noted that Seasame Street Workshop has responded with the following, “As we have always said, Bert and Ernie are best friends. They were created to teach preschoolers that people can be good friends with those who are very different from themselves. Even though they are identified as male characters and possess many human traits and characteristics (as most Sesame Street Muppets do), they remain puppets, and do not have a sexual orientation.”

One thought on “The Bert and Ernie Dilemma”