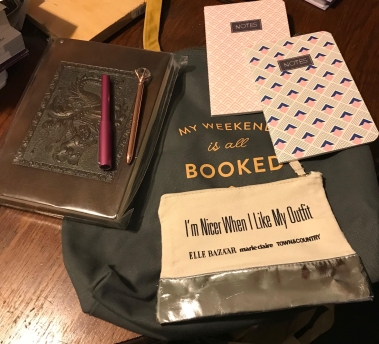 Yesterday, I asked you all to stay tune today’s post, for today I was going to discuss the writing kit that I made. About last week, I was at Barnes and Nobel and was looking at all the notebooks that they had, and I picked out one of the bigger journals that had lined paper. I also picked up another pen, like we writers could never have enough pens. I also picked up a bag to put it all into. While on this same trip, I picked up a fountain pen, a little more on that later. The little pencil bag was a gift from the cashier, so that one was free, which is always a plus. Then a few days later, while I was at the Target I found some small thin little notebooks to add to my kit. These little notebooks are going to used as a place where I could jot down ideas for stories and such.

I have wanted to create this type of kit for a while now, I just couldn’t find the right tools for creating the kit that I wanted. My idea behind the kit was that I wanted a bag that was not a book bag, or a pack back, but was big enough to hold a notebook or two if so be. A bag that I could have in my car that would not draw too much attention for thieves, and yet it was a bag that I could take with me and that I could write down stories while I was out and about.

Therefore, when everything came together last week this kit was born and I am so happy to have a bag that has some of the essential tools that are necessary for me to write on the go. Now on the story of the fountain pen…

When I was about nine-years-old, I received my first fountain pen. Granted, the first time I tried using this pen, it marked me up with drips of ink. But overtime I began to master that pen. I mean I loved that pen, until it ran out of ink and could not find a replacement cartridge for it. However, since that fountain pen died, I have always wanted to replace it with another. I mean I have looked for years and granted they are expensive, which is one of the reasons that I could not replace my original fountain pen, until I got older.

Even though the price was one factor, I would not let that sink my dream of wanting another fountain pen. But hold and behold, Barnes and Noble was selling fountains at almost a fraction of what they were online. Granted, when I went up to the cash register the sales clerk irked her eyes at me and said, “You do know that this is very expensive pen?”

I smiled at her and answered, “Yes, I know it’s expensive for it is a fountain pen.” Then I went into my story of wanting to replace my first fountain pen, and then she sort of changed her tone about me purchasing an expensive pen. Sorry, if you are selling them in the store do not judge the customer who wants to purchase one, especially when they know what it is and why they want it so.

Granted, the one draw back to this fountain pen is that the ink is blue and not black, but the manufacturer does sell replacement cartridges for the pen in black. But I can live with blue ink for a while, since I found what I really wanted, which was the fountain pen.

Let’s also face the fact that we writers tend to have a favorite pen, and there is usually a story that goes along with that pen until it is either lost, stole or worse, its sadden death. But now matter what happens in live, we always go back to that favorite pen and wish that we could find another to replace it even if it is a hard thing to do.